The beach line is not a straight line, but a complicated, piecewise curve above the sweep line, composed of pieces of parabolas; it divides the portion of the plane within which the Voronoi diagram can be known, regardless of what other points might be below of the sweep line, from the rest of the plane.

My version of the algorithm maintains a linked list describing the combinatorial structure of the beach line, and a priority queue listing potential future events that could change the beach line structure. There are two types of events:

We store a reference to the parabola we found in the step above. Next, we create two edges. One either side of the new node we’re inserting. Whilst we create two edges they appear as one, each sharing the same starting point but pointing in opposite directions. 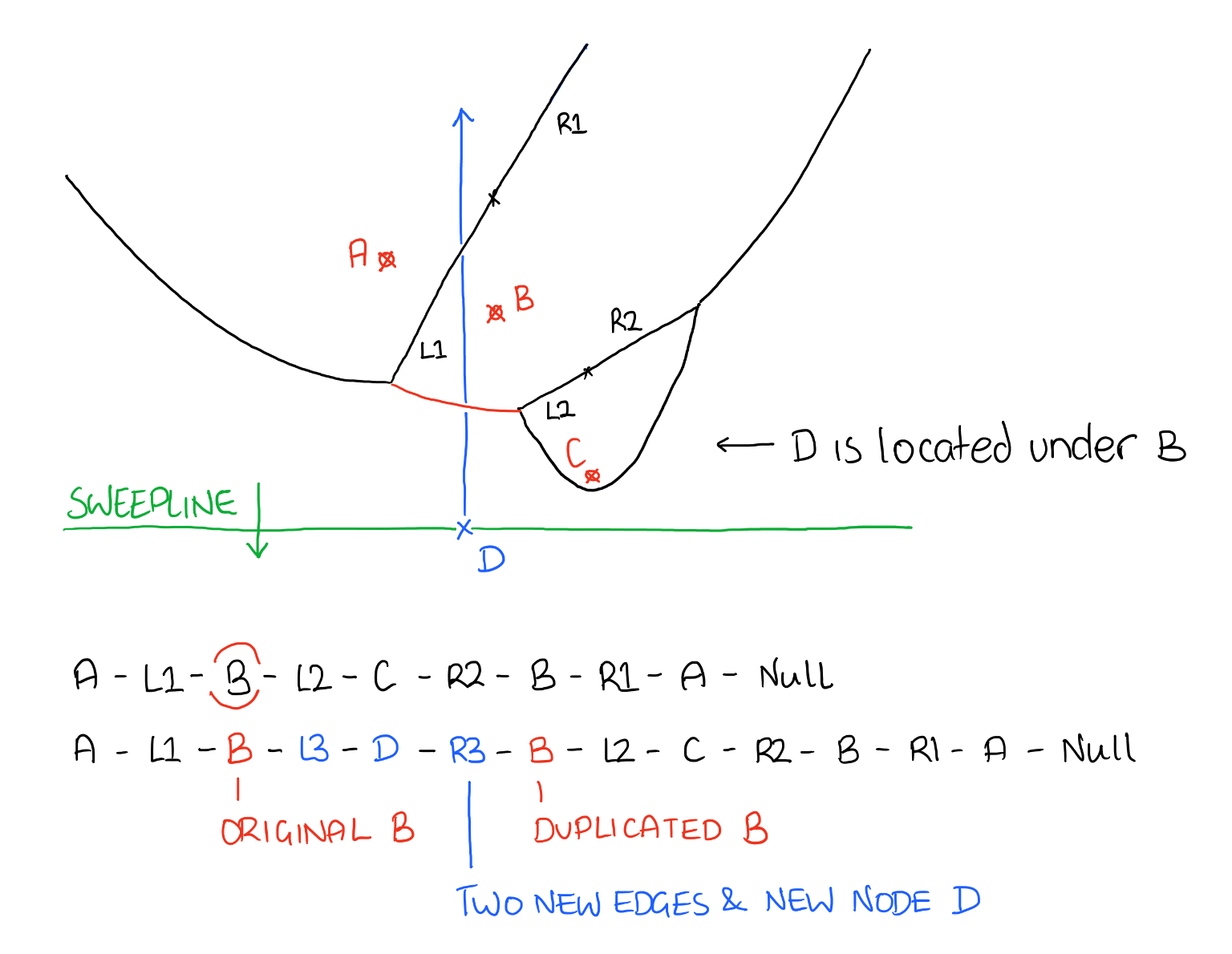 As we can see in the diagram above we have now changed the structure of the beach line, we have inserted a couple of new edges. Because of this we need to remove any circle events from the parabolas/nodes either side of the parabola found in step one. We also need to remove these from the event queue. 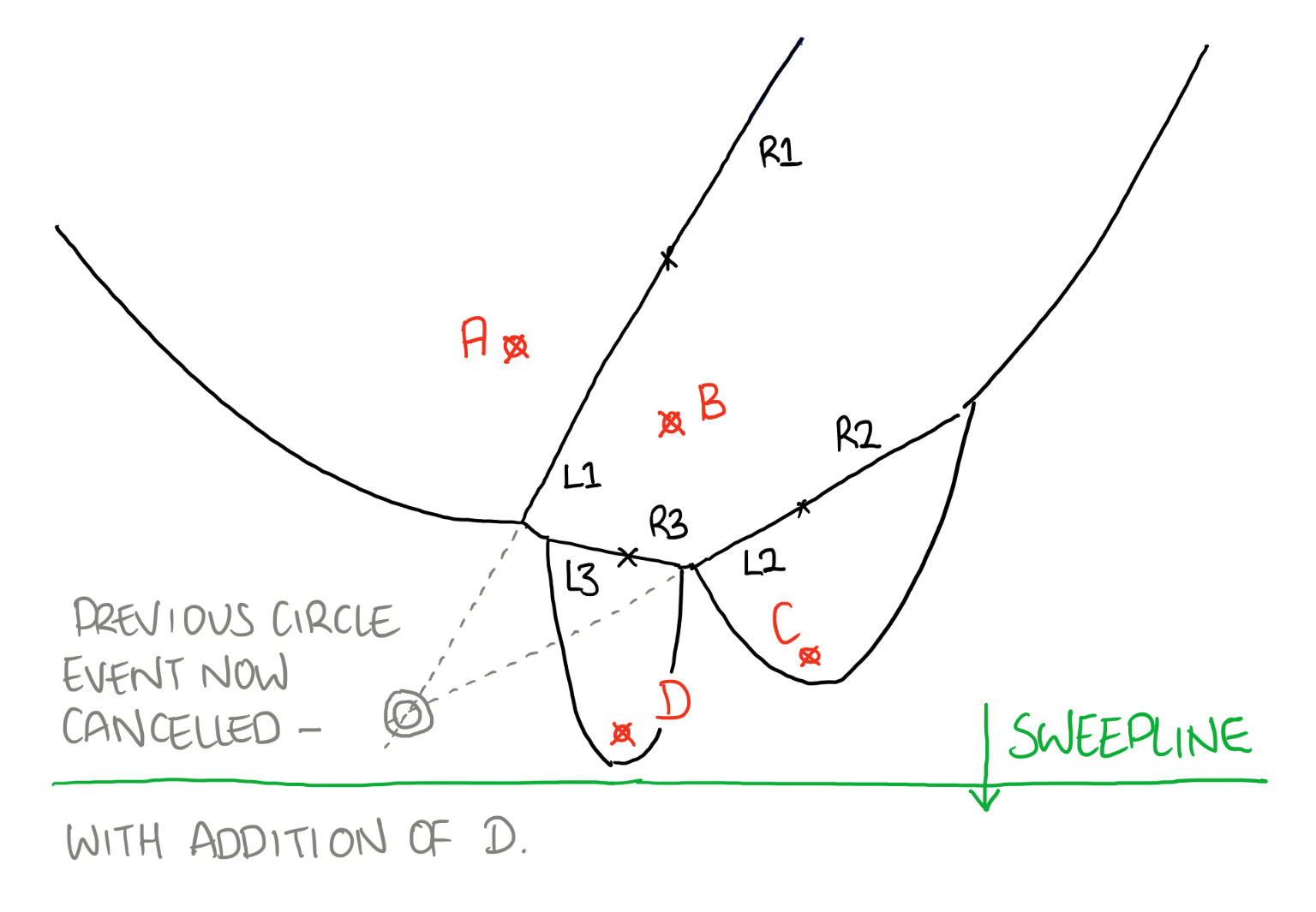 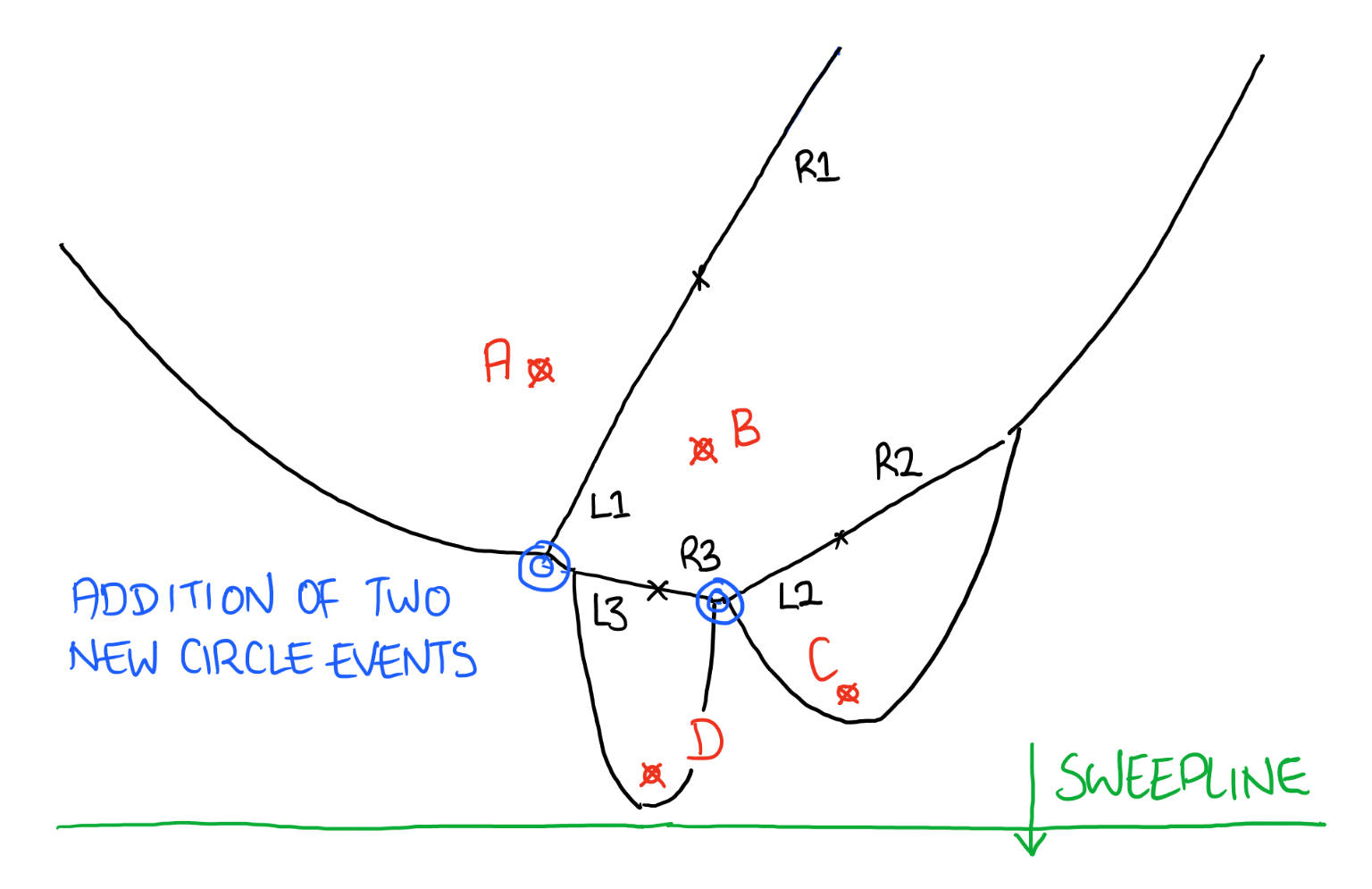 See check to see if a circle event is needed

See create a new edge from a circle event

Once this is done we simply remove the parabola node and it’s adjacent edges from the beach line and insert the new edge in their place.

For the starting point of these edges we know the x coordinate, it’s just the x coordinate of the input point. We just need to calculate the y coordinate, this is where a ray pointing vertically upwards intersects with the parabola.

See find y coordinate of input point where it intersects with a parabola above it.

Next we calculate the Direction. This is done as follows.

Then we calculate the gradient, m. If we draw a line between the generating points the edge would be perpendicular to this line, every point on this edge is equidistant between the left point and the right point.

Finally we can calculate the crossing point with the y axis, C. We use the equation of a line here (y = mx + c) and place in the values for the gradient, and the starting x and y coordinate to get C.

This is just a case of checking to see if the node passed into the function has a circle event associated with it. If it does we remove it, by setting it to null and we also then check through the event queue and remove it from there.

For this we just pass through each element in the queue, if it matches with the one we’re testing we remove it from the queue and stop searching.

We know the equation of a parabola:

p = the distance between the parabolas focus and its vertex OR
distance from the parabolas vertex to its directrix (the sweep line), therefore
p = ( focus.y - sweepline.y ) / 2

To get y simply input the x value of the input point into the equation above.

See also get the equation of a parabola

I search through each pair of parabolas and edges and work out where the edge intersects the parabola.

If the x value of the new point is less than the parabola/edge intersection x value then we know that the new point is under this parabola. If it isn’t we just keep testing each pair of parabola and edges until we find a match.

First I need to get the equation of the current parabola with respect to the current sweepline.y value.

See get the equation of a parabola

Subtract one from the other to give y:

We can plug these values into the quadratic formula:

This gives us two locations where the line crosses the parabola. Remember we’re not dealing with lines, but technically with rays, they have a starting point and a direction. In that case we only want one of these x values. The one I select depends on the direction of the edge, if it’s pointing right we select the highest value, if it’s pointing left we select the minimum value:

[ GET THE EQUATION OF A PARABOLA ]

Finds the equation of the parabola in a similar way to the method described in find y coordinate of input point where it intersects with a parabola above it.

Where a, b and c represent the equation of the parabola in the form:

[ CHECK TO SEE IF CIRCLE EVENT IS NEEDED ]

First we need to get references to both the left and right edges for the current node (parabola). With these we find out if these edges intersect with each other.

We now now know if the two edges will intersect at some point in the future. If they will we need to add a circle event to the event queue. For this we need to add a trigger point, this will be triggered when the sweep line hits the bottom of the circle. 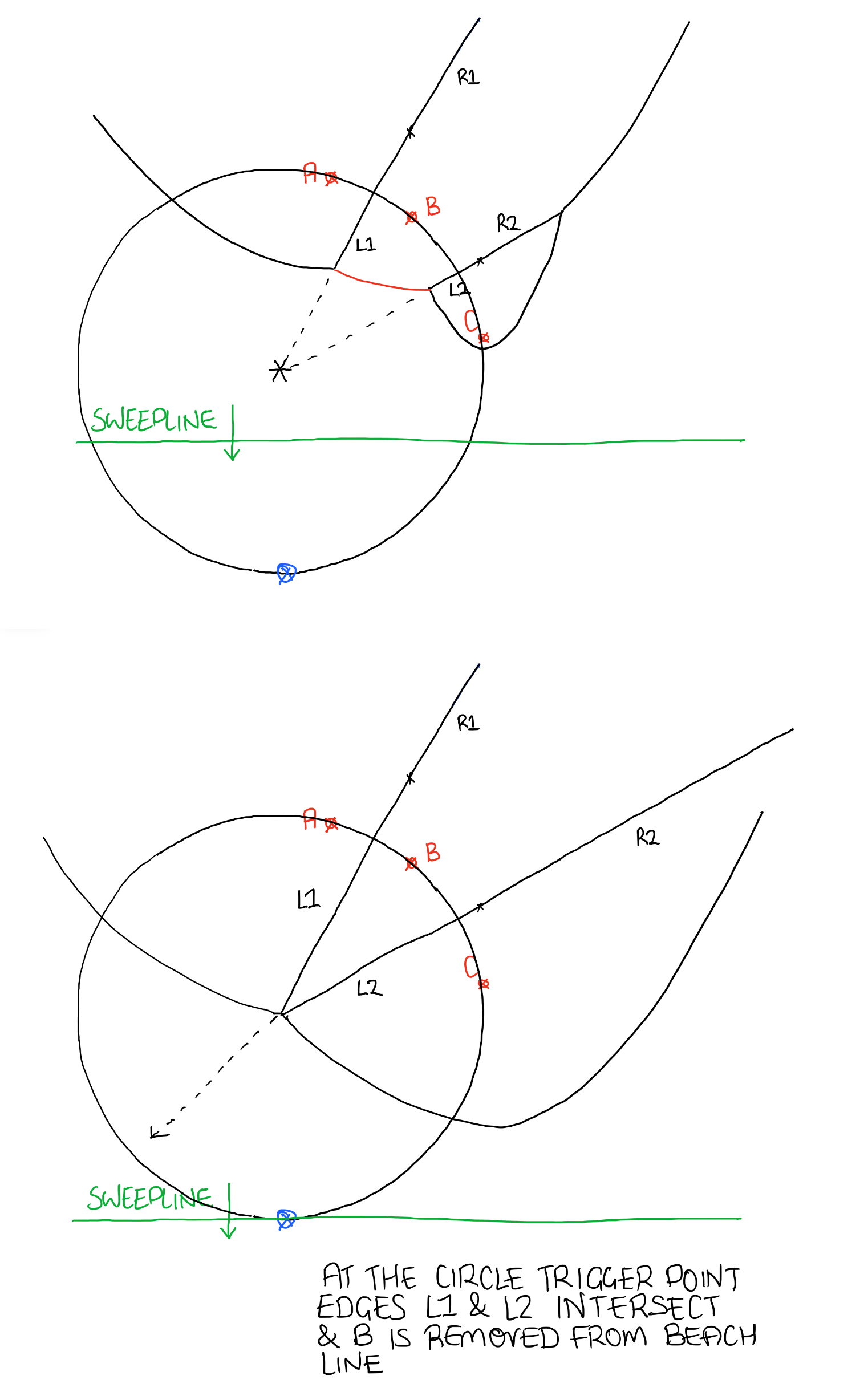 [ CALCULATE THE INTERSECTION BETWEEN TWO EDGES ]

We can find the intersection between two lines quite easily, firstly we just check to make sure they are not parallel. We can do this by ensuring the gradient for each edge are not equal to each other.

Next we just set the two edges equal to each other to find x:

We now have the x value, we can calculate the y value by substituting the x value into one of the line equations:

We now have a potential crossing point (x , y). Bear in mind we’re not dealing with lines, we’re dealing with rays, they have a start point and a direction. We need to make sure the intersection point is not on the other side of the ray.


If all these tests pass we have an edge - edge intersection at point (x, y).

[ CREATE A NEW EDGE FROM A CIRCLE EVENT ]

We know the starting point of this new edge, we calculated this when we worked out the end points of the two edges which triggered this circle event.

Then we calculate the gradient, m. If we draw a line between the generating points the edge would be perpendicular to this line, every point on this edge is equidistant between the left point and the right point.

Finally we can calculate the crossing point with the y axis, c. We use the equation of a line here (y = mx + c) and place in the values for the gradient, and the starting x and y coordinate to get c.

For more on Fortune's algorithm check out the Wikipedia page, bear in mind their version travels from left to right across the plane.

I've produced a couple of videos of the diagrams being generated, these are on my YouTube channel here and here.

The code to generate these Voronoi diagrams was produced in Javascript and also Objective-C.

You can download the Javascript code on my GitHub page.